Our big band in Mjölby Sweden was looking for an inspiring and challenging projekt and I´ve followed Anna’s Edith Södergran project for quite a while. So I thought that this would be a nice project for our band.

The arrangements has a modern flavour and capture’s Anna’s feel for the lyrics in her original compositions, they are very beautifully written and gives the band moments to shine.

The arrangements is a big challenge for all the hornblowers, you really have to be aware of the intonation and who has the lead line.

The reedplayers had to double on at least one and in some cases two extra instruments we used all the saxes including soprano. Clarinets, flutes, bassclarinet and even a tenorrecorder was brought in to the section. The brass section had to work with their lyrical playing with mutes and intonation was sometimes quite hard to master. For the rhytmsection it was interesting to try to catch the somewhat subtile grooves and try to play softer than you normally do in a big band.

We rehearsed for about two months, every sunday until Anna joined us and it all locked together. It was quite fun to do a minitour with three concerts in different environments.

Anna is a dream to work with. She is a good Singer and writes beautiful compositions. She handled the band with warm authority and humor.

She performed the songs with ease and talked about Edith and her life like she was a sister.  A warm and interesting portraits of one of the greatest nordic poets.

We will remember this project for a long time. It was inspiring, fun and with depth because of the lyrics. I was fun to do a swedish language concerto it doesn’t happen very often in the Bigband community 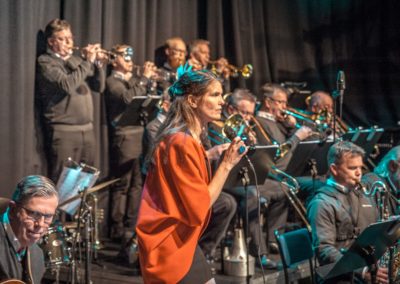